Crown Castle is working with the City of San Diego to install 326 additional low-powered antennas called "small cells" throughout the area. Connected by fiber-optic cable, small cells are equipped to manage high-speed data and dramatically increase capacity. The technology is instrumental in reducing the strain on traditional communications infrastructure and relieving network congestion caused by our insatiable appetite for mobile data. With the advent of smarter, faster technology, increasing network coverage and capacity is critical to ensuring San Diego residents have reliable access to all mobile services, including emergency services.

Since 2004, we have been working with the City of San Diego, a major hub for tourism, military operations, technology, biosciences, and international trade, to expand wireless capabilities. With about 1.4 million people across the area, San Diego is the eighth-largest city in the United States and the second-largest in California. Additionally, San Diego hosts the largest naval fleet in the world, home to more than 50 ships and more than 35,000 sailors, soldiers, Department of Defense civilian employees, and contractors. In fact, about 5 percent of all civilian jobs in San Diego county are military-related, and 15,000 businesses in the county rely on Department of Defense contracts.

The pace of today’s technology is accelerating rapidly, thus increasing the demand for data. At Crown Castle, we’re responding by offering San Diego residents and businesses access to leading wireless infrastructure. We’re proposing building out a new small cell network—connected by high-capacity fiber optic cable—to create more efficient and reliable mobile service. The technology will augment the current network and increase the city’s wireless coverage. Among other benefits, the increase in coverage and capacity will offer residents more reliable and broader access to critical public safety services, such as 911—80% of 911 calls originate via a mobile device.

Since small cells often are inconspicuously installed on right of way infrastructure like street signs, utility poles, and streetlights, they blend into their surroundings and preserve the aesthetics of their environment. Working in partnership with city staff, we plan to enable improved wireless carrier service while keeping San Diego’s character intact.

The map above shows proposed areas of activity in San Diego. 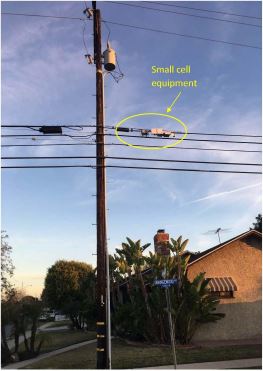 Crown Castle owns, operates and leases more than 40,000 cell towers and more than 80,000 route miles of fiber supporting small cells and fiber solutions across every major US market. This nationwide portfolio of communications infrastructure connects cities and communities to essential data, technology and wireless service—bringing information, ideas and innovations to the people and businesses that need them.

Fill out the form below and one of our Colocation experts will connect with you soon.

We’re reviewing your message and will be in touch shortly. In the meantime, learn more about how our Colocation enterprise solution can help keep people and businesses across the country connected.